Miho Kanani Morinoue is a Hawaii based artist living in Holualoa, Hawaii. Raised by two visual artists, Hiroki and Setsuko Morinoue, she has an extensive background in both art and dance. She has had a 10-year career with Complexions Contemporary Ballet Co. in NYC and has danced with Esse Aficionado, Lar Lubovich, Lee Whitchel and Neo Labos. On separate commissions she has collaborated closely with choreographer Dwight Rhoden as a rehearsal director and costume designer for dance companies throughout the mainland. Her costume designs are represented in companies such as Alvin Ailey American Dance Theater, Ballet Arizona, Ballet Met, North Carolina Dance Theater, Pittsburgh Ballet, and many others. Her art can be found in the collections of the Library of Congress, DC and the Whitney Museum of American Art, NY. Currently she teaches dance at Kona Dance and Performing Arts and serves as Program Director for the Donkey Mill Art Center, home to the Holualoa Foundation for Culture and the Arts. 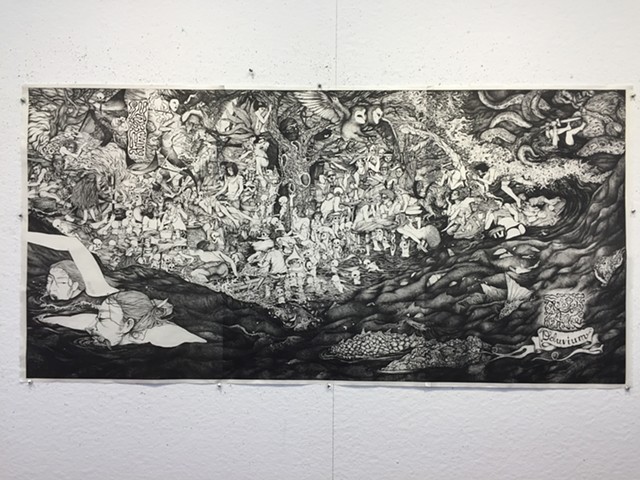 Deluvium or deluge is a large-scale lithograph depicting a scene where myth and reality co-exist and co-mingle in the moments preceding a great cleanse. Both dark and whimsical, the narrative explores the relationship between human beliefs and civilization as they relate to the enveloping force of nature that sustains or destroys them.

“The original drawing on Denril began in 2006 during the Bush Jr presidency. I drew inspiration from an earlier drypoint print I made in New Orleans titled Mermaid Lounge. That piece depicted a sprawling scene along the Mississippi river, a tangled surreal reality of poverty, mermaids, drunk liberals, a bit of voodoo, and an homage to Hiroshige’s wave. I revisited the narrative concept on a larger scale in Deluvium; portraying protectors or gods, goddesses, and mythological creatures as they adapt to the worst or best of human behavior and give rise to new and perhaps ordinary heroes.

Frozen in this imaginary scene you may find a Hindu goddess Kali who turns her back and neglects her reverence for humanity, exhausted by the pandemonium. Her trophy necklace of skulls unravels, spilling across the landscape like glass beads on a tile surface and unleashing the ego mocking the silly ways of humanity. In the dark water, Nüwa and Fuxi from the Chinese myth of creation flee from their disastrous attempt at creating a human civilization they hoped would create life anew. The overwhelming chaos of the scene encourages the viewer to allow time to stand still for a moment, enabling them to more fully experience the detail and complexity of the piece.”