THE COVE took me nearly a year to finish. The feeling of the drawing was inspired by my initiation to cliff jumping off the southern most tip of Hawaii. After returning to NYC I started this drawing to reiterate the experience - just for fun. It turned out to be a composition of contradictions which is just the way life is for the most part.

I started with a drawing of my cousin Makoto jumping off of the cliff, his friends watching from above, a guardian angel riding on a dragon (doubling good fortune) and the Centaurs, (not portrayed in their usual drunken beast-like manner but instead as heroes) , saving figures from the strong currents. The rest of the composition seemed just to flow... rich with life. On the very bottom right comer is a sort of self portrait. I have just arrived at the cove and am observing. Above my head is a tsuru (crane), symbolizing longevity and immortality, hiding in a pine tree, which in Japan symbolizes faithfulness in adversity. Not so far away, an old man catches a glimpse of me and seems a bit annoyed, noticing that I don't belong. In the hale (house), Death hovers over the lushes and is smirking at decadence. Decorating the weathered chyochin, (Japanese lantern), hanging at the edge of the lanai, (porch), is the kanji for "harmony". Near the chyochin hangs a paper cloth doll with a painted face called a teruterubozu - Japanese children used to make them to ward off bad weather. The many warriors fighting off sea beasts must have been inspired by the kung fu films and anime I was watching at the time - the sexy pearl diver was inspired by one of my favorite Japanese films on food: "Tampopo" directed by Juzo Itami. Aside from the characters modeled from life, I was inspired by the work of artists I love and admire, such as the ukiyo-e prints of Utagawa, Kuniyoshi and Hokusai and etchings by Goya and Pieter Bruegel the Elder.

Published by Shark's Ink "The Cove" is part of the collection of the Library of Congress, DC and the Whitney Museum of American Art, NY. 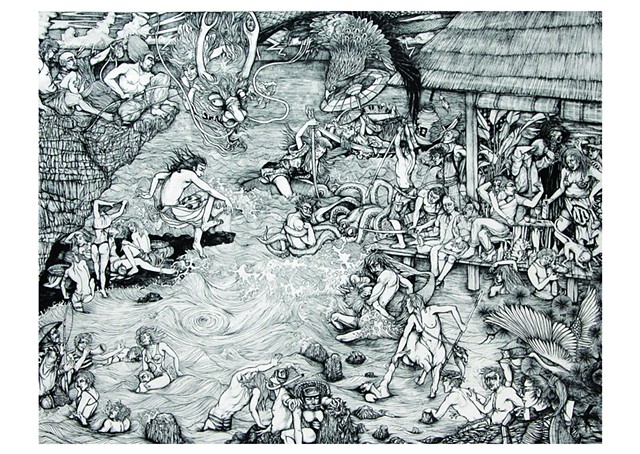